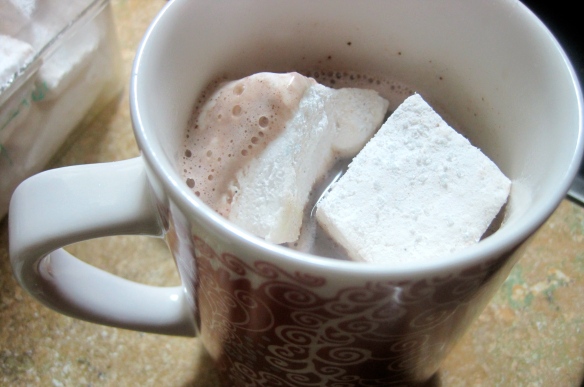 So the days have gotten away from me…I was on a good roll, blogging almost daily, when the pre-holiday madness overwhelmed me. Luckily I had those rum balls to help take the edge off! My final opinion of Martha’s recipe? These balls are boozy, chocolatey and pretty fabulous. I was worried they might be dry but they really do have a texture like fudge. I can’t wait to take some to work tomorrow — and I love that I work in an office where eating rum balls in the morning will totally be acceptable. I also cannot wait to make them for every possible occasion, because dark rum and brownies were clearly made for each other.

Now on to other things: namely fluffy sugary things…The marshmallows turned out great! Making them was a little sticky, but they were incredibly easy (especially with the help of a standing mixer) and they taste fantastic. I did heed Smitten Kitchen’s advice in not scraping the mixing bowl too fanatically. It was hard to resist since I hate to waste food, but I was scared — with good reason! — about getting caught in a sticky sugar web. 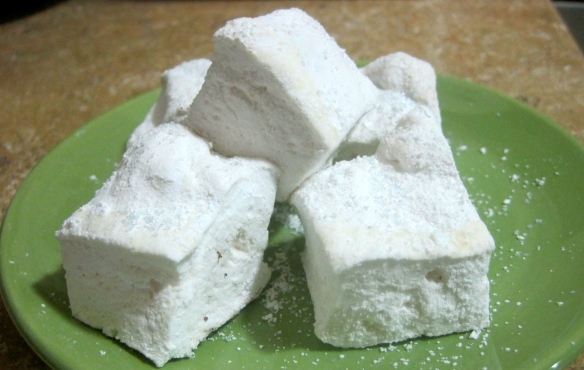 A girl in my office, upon hearing of my weekend plans, asked if I was just eating them plain or if I had floated any in hot cocoa. Now, of course, I have done both (quality control is a serious thing), but I knew instantly what she was insinuating. These marshmallows turn into an almost whipped cream/marshmallow fluff once they are in hot cocoa. They are nothing like the chewy, store-bought ones that just seem to bob around in your drink and get in the way. There really is nothing quite like them.

If I thought the Plush Pluffs fancy marshmallows were good (and oh, I definitely do) it’s hard to imagine that my first-time attempt would even rate on the scale. But, even with some forced objectivity, these homemade ‘mallows are still some of the best I’ve ever eaten. And they look adorable, which is always a bonus in my book! 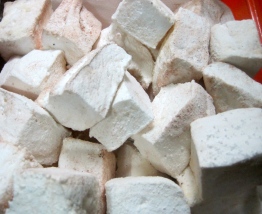 So I’ve been obsessing over Pinterest for quite some time now and the thing that gets me into trouble is that I keep adding to my already growing pile of recipes I want to try out. Luckily I have been wanting to make some rumballs and when I saw this recipe by Martha I knew it would be the one to make this year.

Let me preface this by saying that I’m not even a huge dark rum fan. In fact, I’ll share a relatively pathetic story about what a wuss I am when it comes to actually appreciating the taste of hard liquor. On my 21st birthday I ordered a rum and Coke and it was SO ridiculously strong (probably the bartender’s gift for finally being legal) that I had to send my friend Oliver Lucky to get a couple of glasses of Coke so we could “water” it down. And even after that it was still so strong we had to hold our breath and just chug until it was gone. Oh, college. Good times.

Lest you think less of me, I’ve become better in this regard — though at heart I remain much more of a beer and wine girl (emphasis on beer). But something about the holidays always makes me think of liquor. So I roll with it. I had the necessary dark rum (from a trip to the Caribbean) and I decided to add some other flavors in for fun. 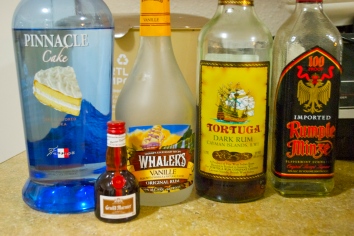 Please don’t judge me for the cake vodka. I saw it in a liquor store and I just had to have it — plastic bottle and all. And let me tell you, it makes a mean vanilla vodka milkshake. Yum!

Anyways, the recipe has you make a batch of brownies. My first thought was: sure, sounds great! My second thought was: hmm, I have a box of brownie mix in the cupboard. My third thought was: just follow the damn recipe. So I did. The brownies were also very easy to make and only bake for about 10-15 minutes so there really is no reason to bother with a mix.

After they were done baking, I let them sit overnight to harden up a bit. Then I played mad scientist with the liquor combinations which was pretty fun and very messy. Now Martha’s recipe says you can eat the rumballs after a couple of hours, but I believe in letting them sit in the fridge for a while to think things over. Plus the reviews said that after 2 days the texture became fudgy, which sounded pretty awesome to me.

So here are my lovely little balls: 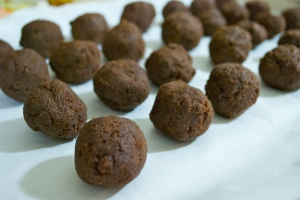 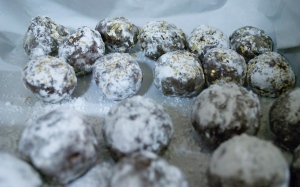 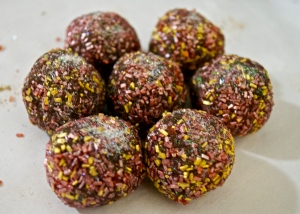 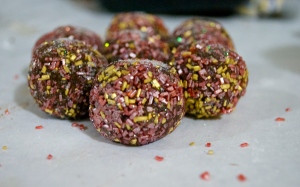