“Get ready for the holidays” salad: Brussels sprouts, hazelnuts, pomegranate seeds and Parmesan

While I like to think it’s still technically fall (it is, right?), this salad has “winter holidays” written all over it. I’m already envisioning it as a staple for my December menu planning. It’s both red and green, the unofficial colors of December, and it uses pomegranate which is a fruit I always forget about until this time of year. 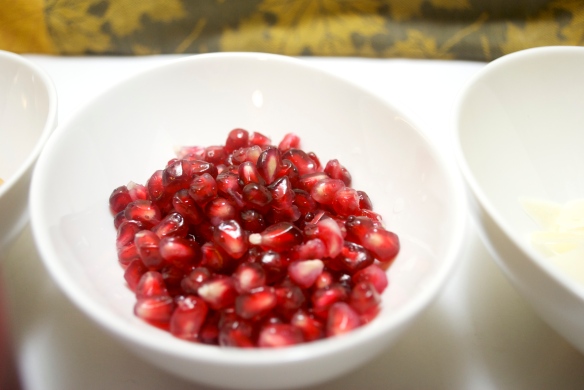 Sorry pomegranate — it’s not you, it’s me!

Anyways I came across this salad while digging through my giant stack of “things to make someday” — pages and pages of recipes liberated from various culinary magazines. I was a bit stressed out because the past few weeks have been so busy I haven’t had time to make real meals. While I’ve managed to whip up several different desserts (just wait for the apple cider caramel post!), my savory cooking has suffered. I’ve been surviving on my favorite ramen and Amy’s frozen “light and healthy” entrees. *sigh

END_OF_DOCUMENT_TOKEN_TO_BE_REPLACED

First I must make a confession — I made this chicken a while ago. It’s just now making an appearance because I couldn’t decide what to write about it. Honestly, I can still look at these pictures and be confused. I enjoyed eating it, but was it something I’d ever make again? Would I recommend it to someone? Would I recommend it to someone I like? Am I bitter at Food & Wine? I don’t know. I have never felt so torn about a recipe before.

Let’s start at the beginning, shall we?

Back in September, I flipped to this recipe for Caramelized Ginger Chicken in the most recent issue of Food & Wine and stopped in my tracks. The picture that accompanied the recipe looked perfect — tantalizingly drool-worthy, both sticky and succulent. I mean really, go to this link and ogle the picture up close. That chicken is so saucy that it practically looks lacquered.

But even though I couldn’t get the recipe out of my head, I managed to wait a month or so to let some other people try it out first. I’m a little obsessed with reading recipe reviews so if the “guinea pigs” discover a problem, I can make adjustments accordingly. The first review I found for this recipe was from Garrett of Noodle Therapy who had clearly been just as seduced by the picture as I had been.

What I read made me nervous. He reported that the flavor was good with a nice hint of fish sauce and the chicken was tender, but the final result looked nothing like the picture, even though he followed all of the directions. WTF? The picture was the best part!

But even with that knowledge, I couldn’t let it go. Finally in mid-December, deciding it still sounded too good to pass up, I bought some chicken legs and got to work.

END_OF_DOCUMENT_TOKEN_TO_BE_REPLACED

I love all things Italian. Set me down in front of a plate of meatballs in red sauce and I’m wholly satisfied. Plop a bowl of pasta in front of me and I am thrilled. Give me a plate full of creamy, cheesy risotto and I am over the moon.

But I try as much as possible to eat things that are, if not healthy, at least not totally terrible for me. Which means making and eating risotto is something I sadly don’t do as often as I wish I did.

Therefore any excuse to whip one up is blessing, which is why when I came across this recipe in an issue of Food & Wine, I couldn’t resist it. The steel oats have to make it healthy, right? Fewer calories, lots of whole grain goodness…and cheese and butter…yum!

END_OF_DOCUMENT_TOKEN_TO_BE_REPLACED

If I added up the amount of times I have used the word “Applejack” in recent posts, I’m sure it would be ridiculous. But it’s the season for deliciously boozy apple-flavored things. It’s called being festive!

So given my deep love for chicken, it only seemed natural to use both together in one fabulous dinner. I saw this recipe for chicken braised with apples, onions and Calvados in a recent issue of Food & Wine and it sounded perfect. I made it for the entree course of my harvest dinner party a few weeks ago, but I tried it out prior to the party to make sure it was sufficiently tasty.

I made it almost entirely as written though, as you  might have guessed from my first paragraph, I used Applejack instead of Calvados. While I’m sure Calvados would have been amazing in there, Applejack was certainly just as delicious. I also omitted the caraway because I think it is disgusting. It’s the spice that ruins “everything” bagels — the smallest amount in my food makes me angry. Since I had some fresh thyme and sage, I used them instead — they are two herbs that get along famously with apples so it seemed like a good addition. 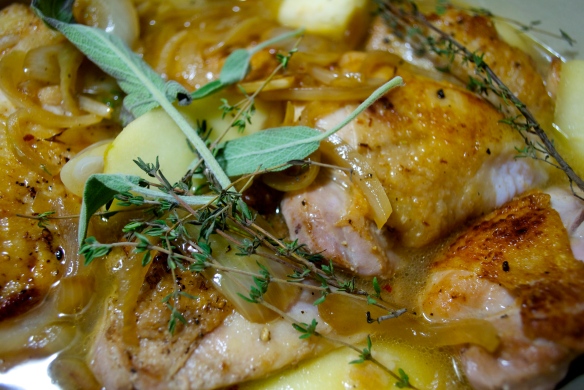 END_OF_DOCUMENT_TOKEN_TO_BE_REPLACED

No Need for Ketchup Glaze Here

Usually I am a pretty healthy eater. I eat a lot of raw veggies, dine frequently on farro and try to avoid fried foods (unless I’ve been drinking *ahem*). So when I pulled a pack of ground Kobe beef from my freezer a while ago, I had already made my peace with eating some seriously fatty meaty goodness. And when you’ve come that far, it’s best to just don a pair of sweatpants and embrace it.

So I did exactly that.

While the beef thawed, I rooted around in my massive recipe binder for something new to try. It seemed sinful to waste Kobe beef on something like burritos or spaghetti, though I have no doubts it would have been delicious in either. Then I found the perfect recipe — one I had been dying to make for quite some time and had just been waiting for the heat of summer to dissipate. Which, let me tell you, has certainly happened here in rainy Portland. If there was ever a time for some “hibernation food,” it’s now.

So I set to work on making this masterpiece: Meatloaf with Creamy Onion Gravy from the Nov. 2011 issue of Food & Wine. And oh, sweet Jesus, am I glad I did. I thought I made good meatloaf before — I always make it with sautéed onions, carrots and celery and I often use grated Parmesan cheese in it for extra goodness.

But this meatloaf…it was divine. It was magical. I used the entire three pounds of meat and I think it was gone in a two days. I don’t know what happened. Oh wait — I know. It looked like this: