I’ve mentioned a few times that my husband is a chef. While this does mean that I eat very well, it also means that I am constantly pleading with him to stop buying cookbooks. We had to buy a huge IKEA bookshelf unit a month ago and it was immediately filled with all of the cookbooks that he had been hoarding at work. Since I keep trying to make him stop buying more, he has slyly found a way to work around that. He now buys them as “gifts” for me.

This is why I got a copy of the Momofuku Milk Bar cookbook for Christmas  — which, yes, I admit, is fantastically fun. This is also why, when in passing I mentioned a blog post I had read regarding chef April Bloomfield, her cookbook A Girl and Her Pig showed up on our doorstep a week later.

I don’t even know why I was surprised.

END_OF_DOCUMENT_TOKEN_TO_BE_REPLACED

So, up until last month, I honestly had no idea that “green chickpeas” existed. I mean, I’d heard my husband talk about buying fresh garbanzo beans before, but things never really clicked in my mind. And so I was unaware of not only their existence, but also how awesome they are. This obliviousness continued until my trip to Seattle a few weeks ago. The first meal I had there was part of an Iberico pork luncheon at Lark restaurant where Chef Johnathan Sundstrom prepared an amazing dish using green chickpeas. 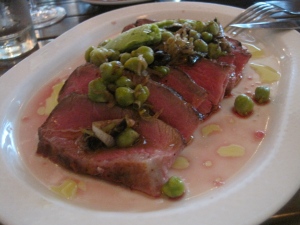 My co-worker Ariel, who has never been a fan of canned chickpeas, was very intrigued. And honestly, so was I. I have always liked “regular” chickpeas — but these were somehow entirely different while being very similar. The taste was a bit milder and the texture a bit softer. Their shape was the same, though the green ones had a bit more variance to their size, much like fresh peas.

After that meal, it seemed as though green chickpeas followed us everywhere. We ran across them at Madison Park Conservatory (in a fabulous chicken dish) and again at Altura, served with their rabbit entrée. Every time we saw them, Ariel and I exchanged glances and vowed to find out if they could be sourced anywhere in Portland.

And, happily, they are. Upon being enthusiastically quizzed about green chickpeas, my husband said something to the effect of, “Yeah, I’ve been using them for years. That’s what they look like when they’re fresh.” Apparently I had even been with him numerous times when he had bought them.

Well, that clears some things up, I guess! My next project was now to buy some and experiment with cooking them. And, as luck would have it, the following weekend I found some at Winco, the last place I would have expected.