The third installment of “A Very Thomas Keller Thanksgiving”

Over the course of this blog, I think we’ve established that my husband and I are practically professional eaters. There was the full lobe of foie gras downed in a single seating at Au Pied de Cochon and the time that we pre-gamed a 10-course dinner at an elegant Italian restaurant with back-to-back meals at two other restaurants…before heading to a serious pork-athon the next day.

Then there was our three-day road trip to Napa. We knew we needed to make the most of our time since we had no idea when we’d ever be back — this is always our excuse for gorging ourselves — so we planned to get in as many meals as our stomachs would allow.

We left Portland at 5 am on a Friday morning on a mission to drive nearly non-stop to San Francisco. I say nearly because we made a pit stop in Redding for my very first In-N-Out burger. Hours later, we suffered through an excruciatingly good meal at Incanto, followed by a two-course brunch at SPQR the following morning.

From there we went to Yountville where we pillaged the paté case at the Fatted Calf, a lovely charcuterie shop, before venturing on to our hours-long dinner at the French Laundry. The very next morning we hit up Thomas Keller’s Ad Hoc for brunch, stopped at the Bouchon bakery for sweet treats and then started our 10-hour drive back home.

We were gone less than 60 hours and I think we gained about 10 pounds. I’m also fairly certain a good portion of that was just from Ad Hoc.

If everything is bigger in Texas, I would argue that perhaps Ad Hoc needs to relocate. Sure, I was expecting portions bigger than the 3-bite dishes at the French Laundry but I was not expecting chicken fried steak larger than my head.

Trust me, the word petite does not apply to anything this place does.

Breakfast for two (or a small army!) 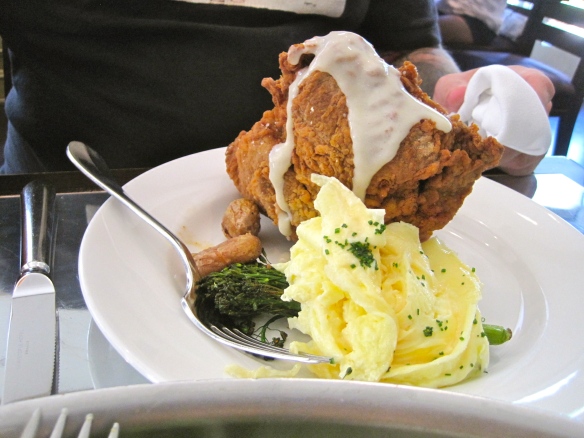 Stop two in a our Napa/Thomas Keller Adventure

Happily not everything in the Ad Hoc cookbook is super-sized. When scouring it for our Thomas Keller-inspired Thanksgiving dinner*, we managed to find the perfect entree — quail. Weighing in at only 4 oz a piece, these game birds were the obvious choice for our dinner for two.

Since our meal hadn’t had a whisper of tradition in it thus far, we selected a recipe that paired quail with pomegranate, our version of turkey with cranberry sauce. 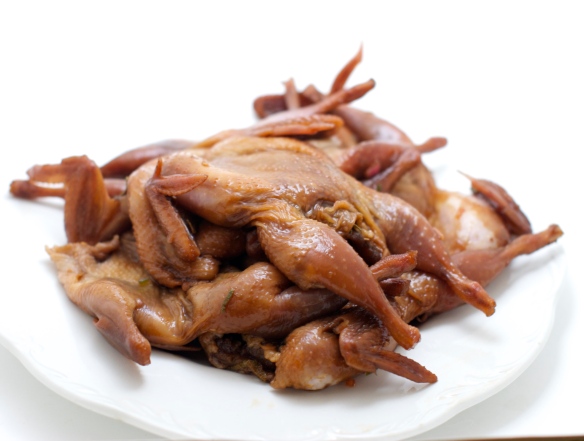 The marinade included both pomegranate juice and pomegranate molasses as well as herbs, a sliced serrano chili and minced garlic. I was curious as to how all those ingredients would taste together — turns out that after cooking, the glaze ends up almost as a sweet-and-sour flavor. The quail were great sautéed over high heat but I bet they would be even better grilled (Keller’s recommended cooking method for this recipe).

The cabbage, though, was the true winner. It was amazing, due mainly to the melted onions which add a sweetness to the dish that could woo even an avid cabbage hater. This is a dish that excels because it is so simple but so perfect when prepared as Keller instructs. The cabbage is blanched, then seared until caramelized, and then almost drowned in butter and the aforementioned melted onions (also heavy on the butter).

Plated with the quail, it was divine. I can say that while I was sad not to have a turkey sandwich the next day, I don’t think we missed out. 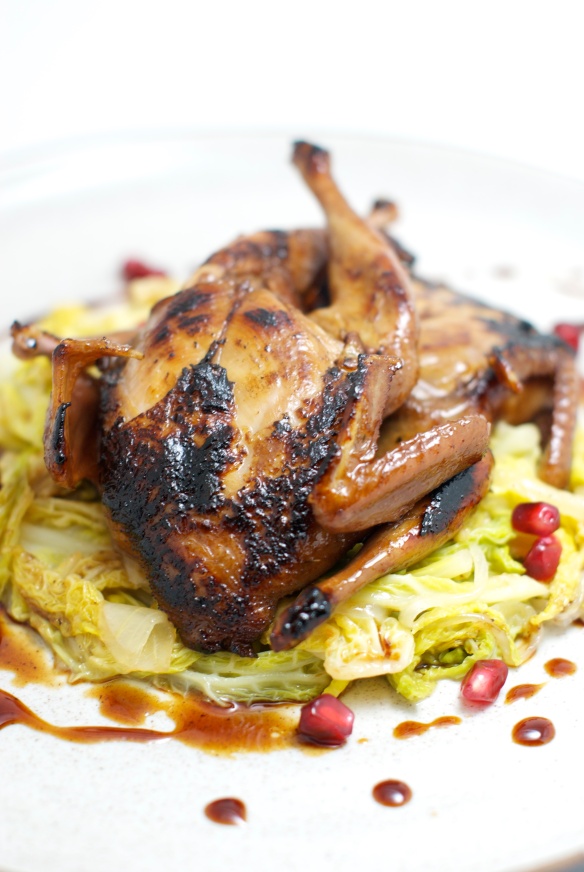 Sadly, I couldn’t find links to the recipes online, so you won’t find the recipes for the pomegranate quail or the savoy cabbage here (but that’s okay because you can always buy the book!). But, here’s one for the melted onions. They are a little time consuming but so, so, SO awesome. I think they could be good in or on almost anything. In fact, I’ll admit to eating a few spoonfuls right out of the pan. Yes, that good.

* If you missed course one, the Oysters & Pearls, click here. Course two was Seared Scallops with Braised Endive. *