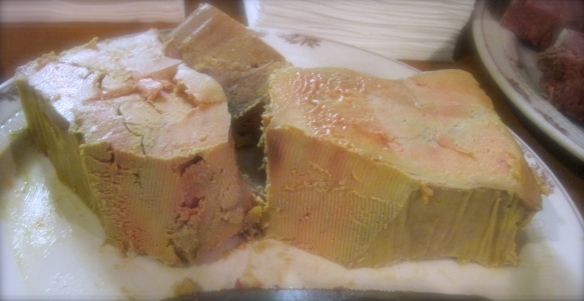 A chunk off of a 3-pound foie gras terrine…Just a little WAG party snack.

To many people the word wag is a verb, often referring to the movement of a dog’s tail. For me (and my co-workers), WAG means Wild About Game, a huge meat-fest that our company hosts every fall on Mt. Hood in Oregon.

We invite a bunch of chefs from the Pacific Northwest, head to the mountain and basically eat and drink for an entire weekend. Though the event itself is hard to organize, it is amazingly fun and a great opportunity to actually hang out with many of our customers in a non-work environment, something that’s pretty hard to come by in the food industry!

WAG has become so infamous in the PNW that it’s one of the events that everyone in the culinary field wants to attend. It could be due to the high-end snacking (foie gras, Iberico ham, freshly shucked oysters) or to the booze (free beer, gin, whiskey and wine). And that’s just the day event — the afterparty is where people really let loose.

In fact the copious amounts of free alcohol — mixed with hard-core chefs who are all off work in one place together — means crazy times often ensue. Every year there is at least one person who imbibes too much and gets what we call “WAG-ed.” This can mean anything from having a solo dance party for hours in parking lot to waking up the next morning locked in a bar. We’ve seen all that and more at WAG.

I did a few posts last fall showing off the sights and bites but this year I’m running a bit behind. I guess a bunch of beer, booze and foie gras will do that to you!

Until then, I’m off to have another bite or two of that terrine…

8 thoughts on “My apologies for being absent, I was busy eating foie gras…”