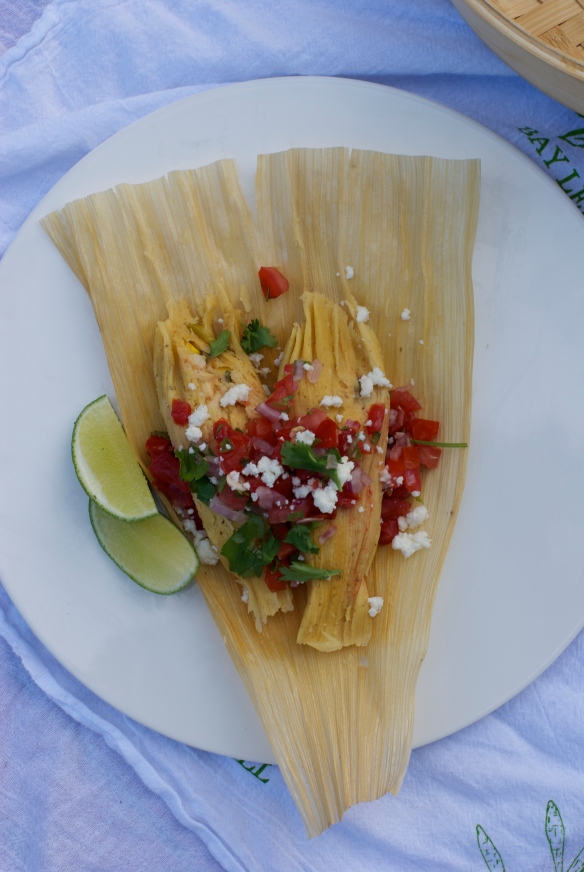 Over the past few months, I’ve been slowly trying my hand at making some of my favorite Mexican dishes at home. My homemade tortillas and sopes were so successful that I soon started dreaming about tamales, something I had never considered making from scratch.

Just as I was thinking about them, my husband (who must have been reading my mind) brought me home two bags of fresh masa from Three Sisters Nixtamal, a Portland company that specializes in masa and tortillas. We had some leftover chicken, a wheel of queso fresco and all the makings for pico de gallo so I figured my project would come together lickety split.

However, this is one of those times when taking a few minutes to do some research really pays off — it turns out I was woefully unprepared for the project I was about to begin! Luckily I found this article, which had oodles of helpful advice and saved me from certain tamale doom.

First off, I had no idea that (unlike when making tortillas, pupusas or sopes), the dough for tamales is not straight masa mixed with water. Instead you need to whip the masa with a fat, most often lard, resulting in a fluffy aerated mixture.

The lard in our fridge was rather suspect and, not having a vehicle to get to the store, I ended up using a combination of Crisco and butter in its place. Once my whipped masa dough passed the water test (a little ball dropped in water will float) and my dried corn husks had soaked for an hour, it was time to move on to the next step – stuffing and steaming the tamales.

Which brings me to the second thing I was blissfully unaware of — how long it takes to steam a batch of tamales. I figured maybe 20 minutes or so, I mean, they aren’t that big. But no, it takes forever, like 1-2 hours! Cue my full-on regret that I had decided to make tamales on a 90 degree day.

Happily my bamboo steamer fit a good amount of the little bundles and while they cooked, I sat outside in the shade, far away from the heat of the stove.

After the tamales were fully cooked, I mixed together a quick pico de gallo, sprinkled them with cheese and fresh lime juice, and dug in.

They were crazy good — so worth the effort! I will definitely use lard next time, but the combination of butter and Crisco worked well enough. They were light and flavorful, with a hint of butter in the background, but not greasy. The filling, which had seemed good but a little ho-hum, tasted incredible once the cooking process was done. It was a proud moment for me when I looked at my pile of handmade tamales…Though they didn’t last long. Within two days, every last corn husk had been opened and its contents devoured.

Now that I feel fairly confident in my tamale making, the next step seems to be to host a party. What would be more fun than to spend a day with friends, drinking margaritas and making a HUGE batch of tamales? I really don’t know!

* Quantities depend on how many tamales you decide to make. Figure on needing only a few tablespoons per tamale. *

15 thoughts on “Homemade Tamales: Good things come to those who wait”