I have always been a waffle lover. I remember my mom making them for my friends the morning after slumber parties and as an adult, they remain a favorite of mine.

While nothing beats the beautiful simplicity of a buttermilk waffle with melted butter and real maple syrup, I have branched out quite a bit in the waffle department: gingerbread waffles, corn waffles with pork belly, waffles with berries soaked in vanilla rum. Heck, I even threw a Waffle Party once, a slightly crazy soiree filled with fruit curds, compound butters, whipped cream and lots of sparkling wine.

But, sadly, I didn’t discover the reigning ruler of waffles until a few years ago — the liege waffle, made with Belgian pearl sugar. The specialized pearl sugar is added to the unsweetened batter before cooking and melts in the waffle iron, creating crispy crunchy pockets throughout the waffle.

The sugar also caramelizes the entire outside of the waffle, making it sweet enough to eat on its own. In fact, these are a popular street food in Belgium where people often buy a waffle to snack on while they walk. The sweetness of the waffle negates the need to dress it up with messy toppings (though that’s part of the fun!) making it a great thing to eat on the go.

I had my first liege waffle after my friend Oliver gave me a gift certificate to The Gaufre Gourmet, a Portland food cart that serves up “wonderous waffles” in an array of sweet and savory ways. Since that initial introduction, I have also enjoyed several liege waffles at the Waffle Window, a bustling little spot with oodles of waffle options.

And with every crispy, crunchy bite I took, I vowed to learn how to make these addictive waffles myself. (If you haven’t noticed, my main cooking motivation seems to be to recreate things I love — probably hinged on a combination of frugality and laziness!)

The first step was finding the special sugar, which I bought at an upscale grocery store, though you can find pearl sugar online very easily as well. Lars Own seems to be the most popular brand. They do a larger Belgian sugar (which is what I used) and a smaller Swedish sugar (which I have in my cupboard, stashed away).

I’ve read in a pinch you can also use broken up sugar cubes, which I find intriguing. Might have to try it out sometime just for kicks! 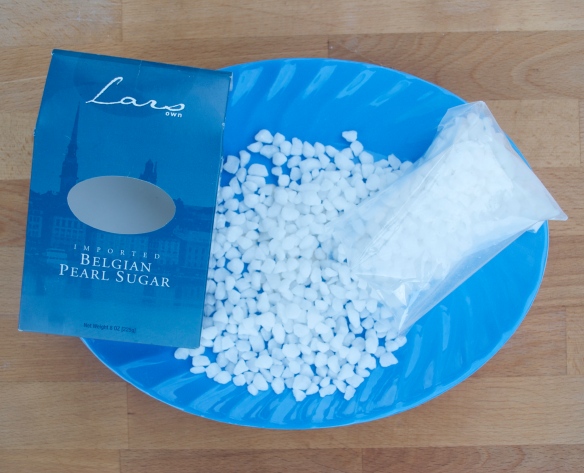 Once the pearl sugar was procured, I moved on to finding a recipe. I had actually intended to use this one but ended up going with the one of the back of the box due to the shorter rising time.

What sets these apart from any of the waffles I’ve made before is that the batter is a yeasted dough. This means that these waffles require some forethought and time because they will need about 30-60 minutes to rise depending on the recipe used.

Once the dough is ready to roll, stir in the sugar. The recipe called for the whole 10 oz package to be thrown in. In hindsight I’d say you could use half of that and they will still be plenty sweet. These waffles were very, very good, but they quite certainly would have been just as tasty with less sugar.

Then put the dough in your heated waffle iron and you’re ready to go! They will take about 3-5 minutes to cook. 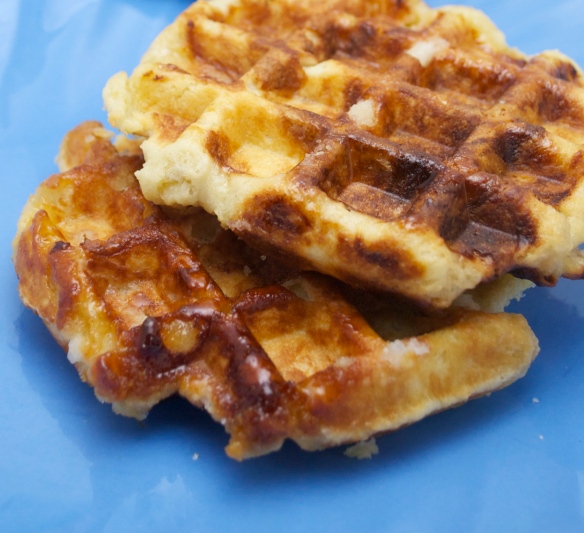 You can just see the caramelized sugar coating shining through!

When I made my first batch I was with Oliver, a fitting coincidence given his role in leading me to the world of liege waffles. We topped ours with fresh berries (which gave the dish some much-needed tartness) and slight dusting of powdered sugar.

They were crack on a plate. I kid you not.

We also made a few with crispy bacon crumbled in. Normally I am a bacon purist, I like bacon on its own but not really in things. But the batch of bacon waffles were shockingly good — the salt, smoke and generally savoriness of the meat made the sweetness of the waffle even more delicious.

Craving that sweet but salty balance again, I re-heated some of the le

* These waffles keep great by the way — the melted sugar keeps them crispy and a quick trip in an oven or toaster is all they need to be just as tasty a second time around.*

After they were heated through, I topped them with fresh spinach, grape tomatoes, caramelized onions, queso fresca and some grated Parmesan. 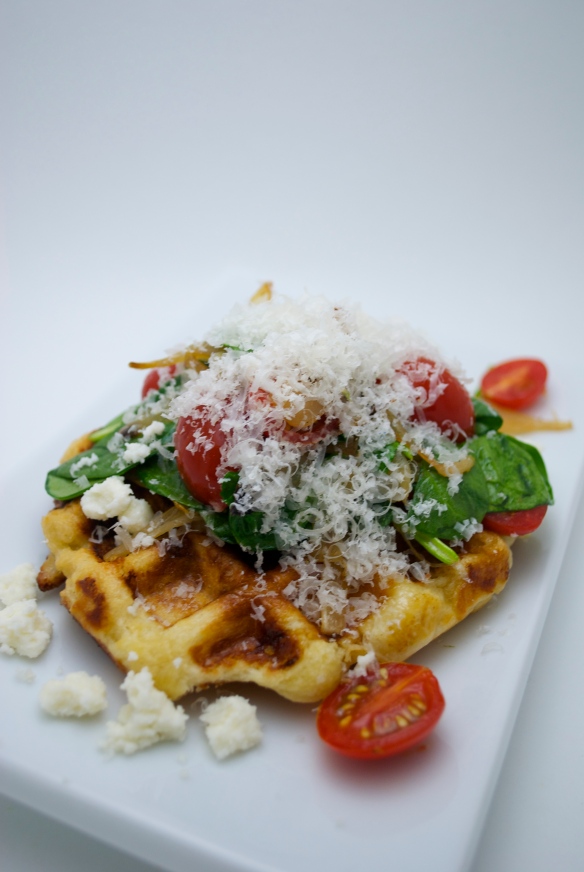 I seriously can’t wait to make them again!

13 thoughts on “Pearl Sugar & the Liege Waffle: A story of sweet obsession”