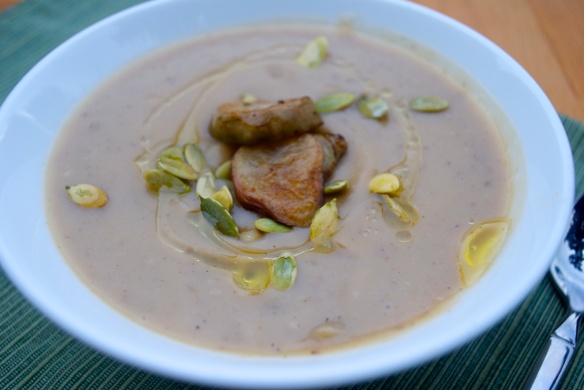 Whenever I mention sunchokes, my friend Ariel inevitably brings up the sunchoke soup we both enjoyed as part of a benefit dinner three years ago. It was sinfully creamy with a robust nutty flavor and came indulgently topped with Dungeness crab. It was a soup I was scared to recreate for fear of tainting the fond memories of it.

Also I knew my at-home version would be pale in comparison as I just cannot add as much cream and butter as I’m sure would be necessary to fully capture the flavor of the original. These are why some dishes just taste better if you don’t make them yourself!

But when sunchoke season rolled around this year, I still felt the urge to make a soup. For my wallet’s sake, I eschewed the crab altogether and for the sake of my waistline I used half and half instead of cream. But happily for my belly, this soup was still outstanding and totally hit the spot on a blustery fall day.

Sunchokes, if you’re unfamiliar with them, are rhizomes that resemble gingeroot. They are knobby and fairly unattractive as far as produce goes. However, their unassuming appearance belies their deliciousness. They are sweet when roasted and inherently nutty in flavor. I cannot get enough of them, even overlooking their, well…troublesome nature.

To make this soup, I started with this recipe, changing things up slightly. The main change I made was roasting half of the sunchokes in the oven until they were caramelized. This gives the flavor of the soup some extra depth.

My first bowl I ate garnish-free. I was so hungry I couldn’t wait.

The next night I went all out — roasted sunchokes, toasted pumpkin seeds and a drizzle of hazelnut oil. While I really loved the extra nutty flavor of the oil, I wish I had had some sherry because I think that would have been pretty divine swirled into this soup.

As it was though, this dish was wonderful and totally took my mind away from cream and crab. I think even Ariel would have agreed, but this soup was so good I kept it all for myself! 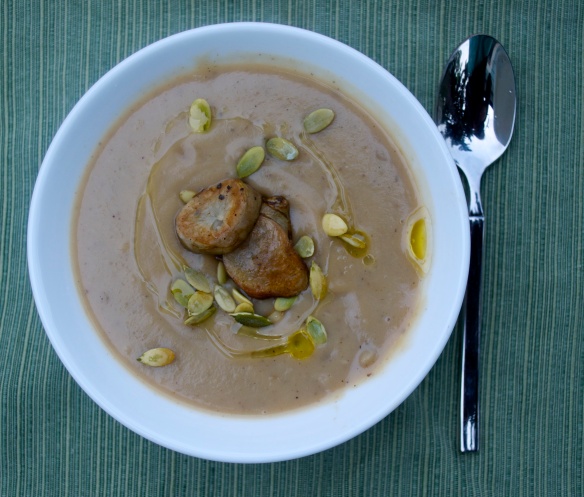 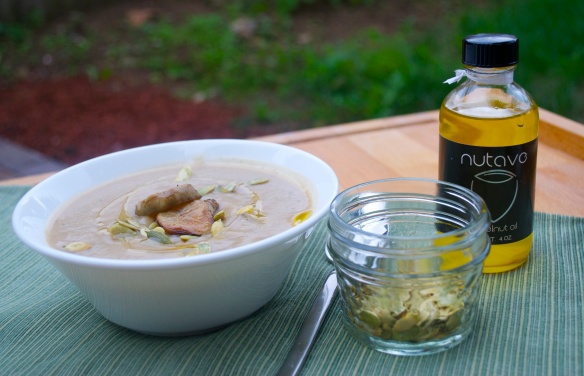 Wash, peel and slice the sunchokes. They will oxidize so toss them in a bowl of water with either lemon juice or white wine vinegar added to it. Once they are all prepped, remove half of them, dry, coat with oil, salt and pepper and roast in the oven until they are brown and tender.

While those are roasting, melt the butter in a large pot over medium heat. Add the onion and garlic and cook until tender, about 10 minutes. Add the other half of the drained sunchokes, cooking another 5 minutes.

Add vegetable stock and bring mixture to a boil then reduce to a simmer. Let cook for about 45 minutes or until the sunchokes are very tender. Let cool slightly.

Working in batches, puree soup in a blender until very smooth combining both the roasted sunchokes and the mixture in the pot, using only enough cooking liquid to keep the consistency right. Put mixture in a pot and stir in half-and-half or cooking liquid as needed. Season to taste.

Top with pumpkin seeds, hazelnut oil and a few slices of roasted sunchokes if desired. 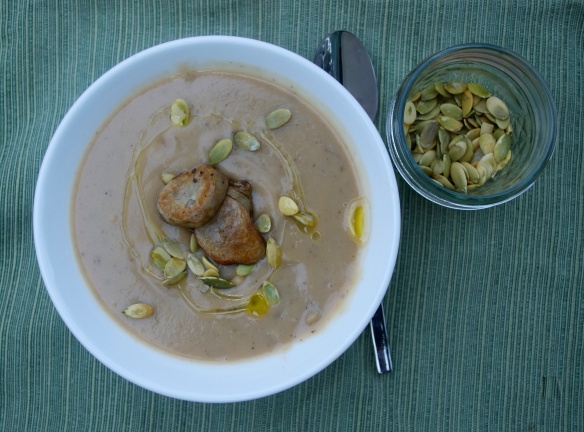