I’m going to be upfront about something. This is the first time I’ve ever eaten or made beef rendang, so I can’t tell you how it compares to other versions out there. I can’t even tell you if it’s at all authentic, but I can tell you it was delicious!

A little back story: I’ve had this recipe for Beef Rendang kicking around in my arsenal for a long, long time (3 years to the month!) and for some reason I never think to actually make it. But finally, last weekend, I had a beef chuck roast that needed some love and attention.

My first instinct was a traditional beef stew, this one in particular, but I didn’t have a whole bottle of wine on hand to just use for cooking. My next thought was to do more of a curry-style braised beef and then I remembered this recipe. I even had the ingredients — clearly it was meant to be!

Since I was unfamiliar with rendang in general, I read a little bit about the history of the dish to get some background. It originated in Indonesia and should contain a serious list of spices, most often ginger, galangal, turmeric, lemongrass, garlic, shallots and chillies. It’s often mistaken as a cousin to the curry but rendang should actually be dry — as in cooked so slowly that the meat absorbs all of the liquid.

Considering that several of the reviewers complained that the final dish contained way too much liquid, I’m guessing this recipe took some liberties. But I figured I could actually use that to my benefit since I had decided to use my crock pot to make it. My plan of attack was simple: to braise the beef until tender and then remove the liquid and reduce it on the stove top. That way I could take care of my weekend chores without worrying about burning dinner.

I started off by searing the beef to a dark crispy brown on all sides before dumping it in the crock pot. Next I made the spice blend — which smelled fantastic, lots of ginger, shallots and garlic plus cinnamon, turmeric and other fun stuff. It will literally make your mouth water!

Once the spices were ground, they needed a quick sauté. 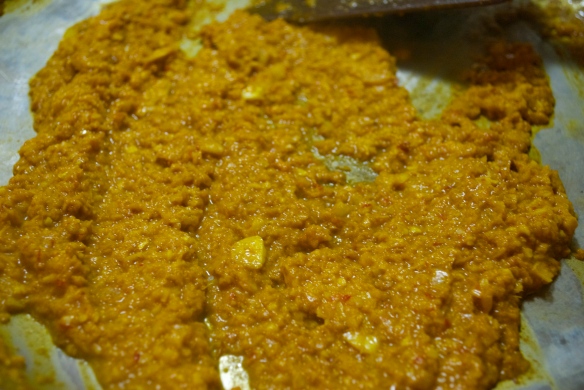 The mixture, along with some other goodies (coconut milk, lime juice and zest, lemongrass), went into the pot. I put in about a cup of chicken stock, popped the lid on and let the beef cook for five hours or so on high.

Once the meat was fork tender, I drained out almost all of the liquid and reduced it on the stove. I started with over a cup and a half and brought it down to less than half a cup. Then I stirred it back into the beef.

I served the whole shebang on top of farro and topped it with sliced green onions and lime zest. It was pretty wonderful — the spices make it very flavorful but not overpowering and the coconut milk makes it creamy but not too rich. It takes some time for the beef to cook, but for a lazy weekend, it hit the spot. We paired it with a bottle of Riesling and magic was made! 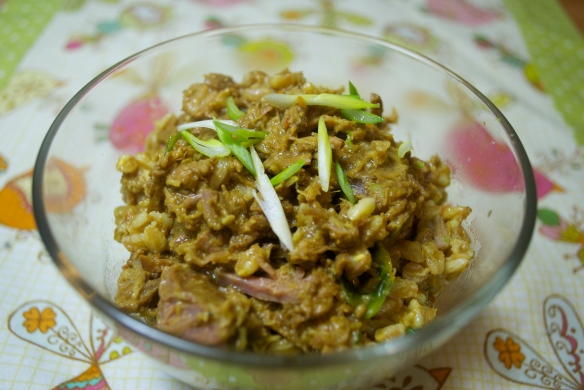 10 thoughts on “The Spice of Life: My first attempt at Beef Rendang”