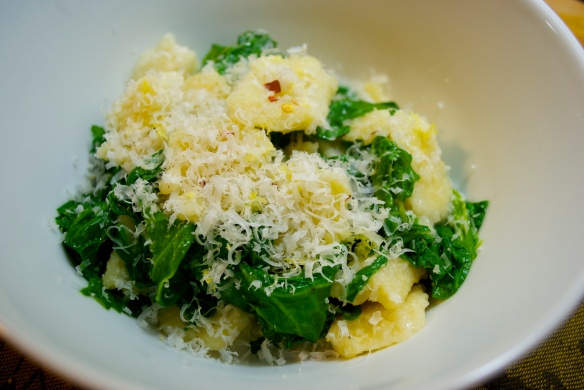 Frascatelli with Mustard Greens and Pecorino

The title of this post contains a pun, though you’ll only catch it if you actually know what frascatelli is — which up until a few months ago, I sure didn’t. But when I saw this recipe for Frascatelli with Mustard Greens and Pecorino in the November issue of Bon Appetit, I was intrigued enough to do some research. Frasca is Italian for branch, which refers to the original method for making these semolina dumplings.

This is quite possibly the easiest pasta to make at home. There is no special equipment needed and only two ingredients are required, semolina flour and water. You pour about two cups of semolina flour in an 8×8 baking dish and then slowly flick it with water from your fingertips until the top of the dish is ragged with water droplets. These droplets absorb the flour and within ten seconds, become small little dumplings which are sifted out and set aside. Once you have gone through all the flour, you cook the dumplings in boiling water and that’s it — fresh pasta in minutes.

Or that should be the case anyways.

Sure enough, the process of making these dumplings was easy. Flick water, sift dumplings and repeat? Ok. 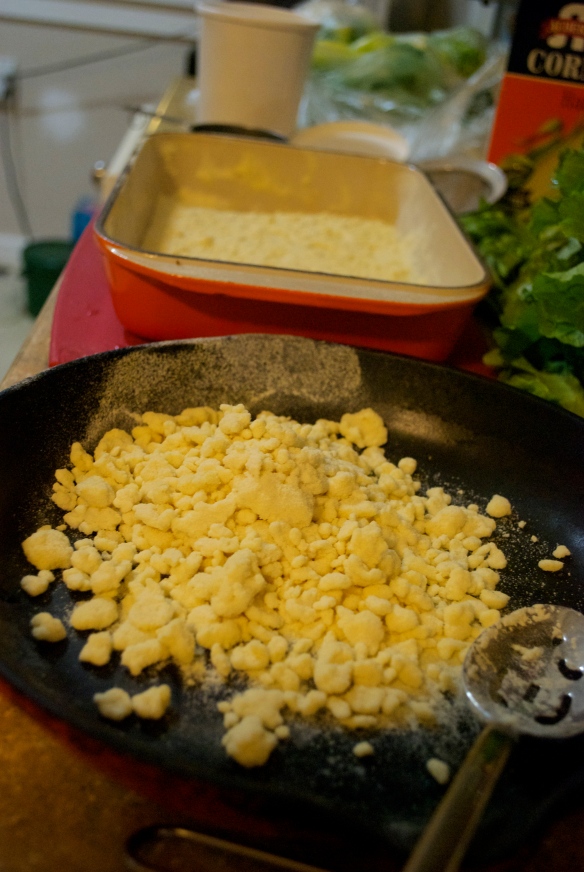 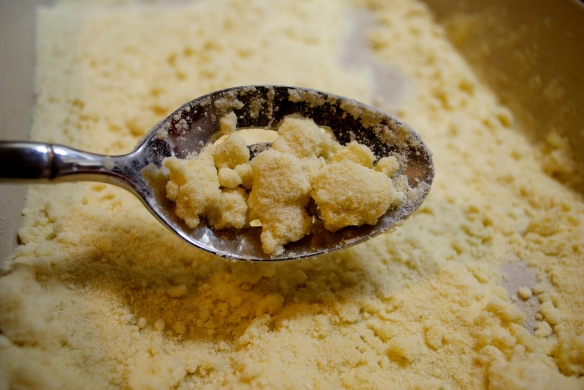 Sift through the flour for the formed dumplings

The dumplings should be “nickel sized” according to Bon Appetit. Mine were all over the place, as you can see above, with the majority being closer to dime sized. But I had googled the hell out of this recipe to find others who had made it. Several said the size range is not unusual and that they would all cook up fine. So I took my finished dumplings and progressed to the cooking stage. 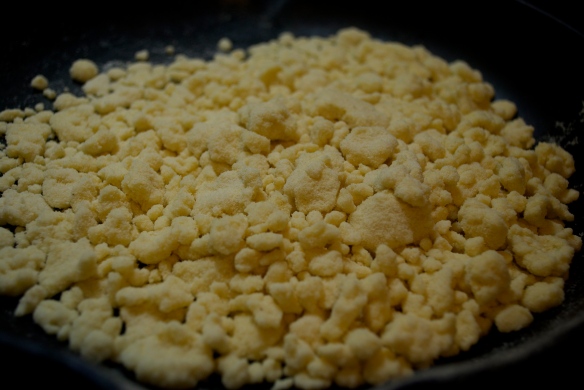 Frascatelli waiting to be cooked

And here’s the part where things took a downward turn. I was curious this whole time about why the dumplings don’t just dissolve in boiling water. When I read reviews on this recipe, one person said their frascatelli turned instantly to mush when they tried to cook it. Other people cautioned to have the water at a slow rolling boil — anything more vigorous will break up the frascatelli.

I heeded their advice and waited until my salted water was just barely above a simmer. I added a handful of dumplings.

And I watched them all dissolve.

This was one of those times when, had I been hungry, I would have said screw it and thrown everything away and just eaten ramen for dinner. But I was still optimistic about this adventure.

I decided to squish my small dumplings together to form more of the nickel-sized shape that had been instructed. They resembled tragic orecchiette, but I didn’t care. 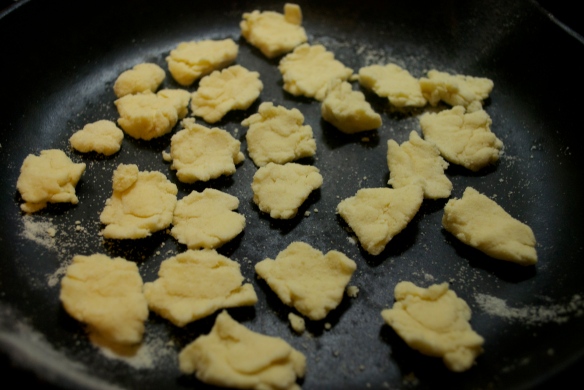 I started off with another pot of salted water and this time I turned the heat off once it hit a simmer. There was barely any movement across the surface when I dumped the newly formed dumplings in.

I held my breath while I waited to see what would happen.

And, happily there was success! I’m not sure if it was the water temperature or the larger dumplings but I didn’t lose a single one. 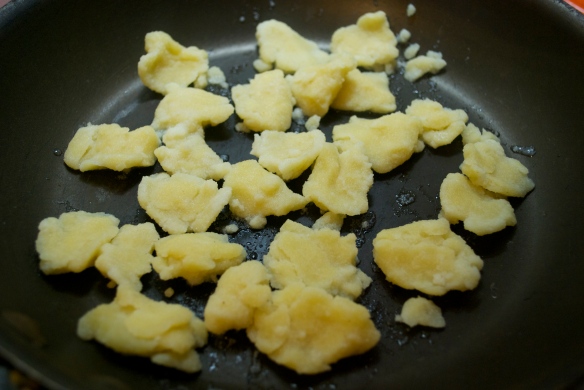 They are a bit unsightly, but they will soon become delicious, I promise.

Then the rest of the recipe comes together with ease. Heat some butter, add dumplings and lightly sauté, being careful not to let them stick to the pan. Then add your lovely and vibrant mustard greens: 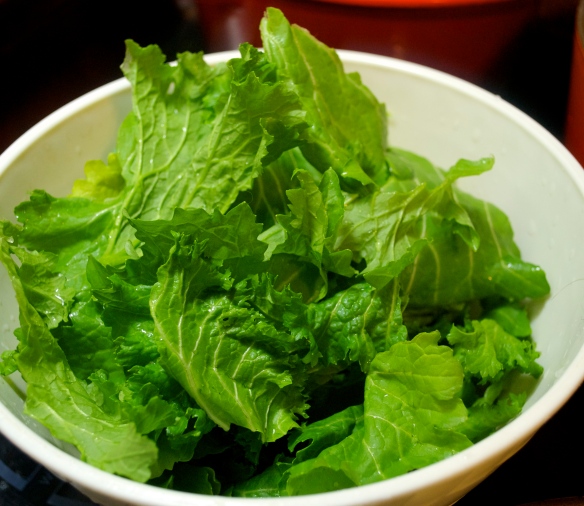 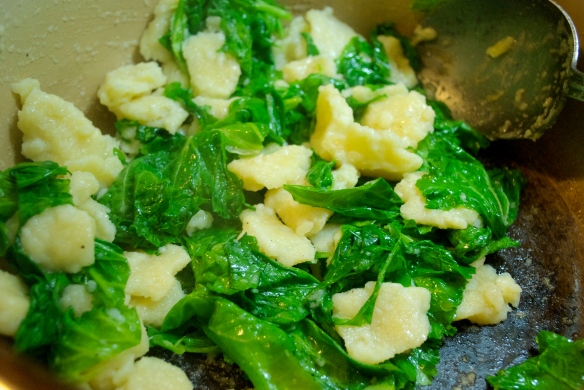 At this point, I added some lemon juice and zest, chili flake and a little splash of water from the pasta pot. Then it was time to plate up: 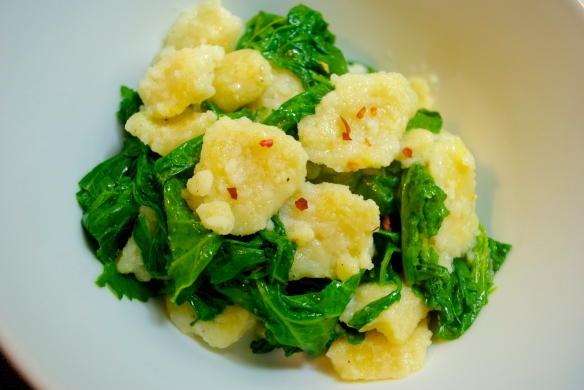 And cover in cheese: 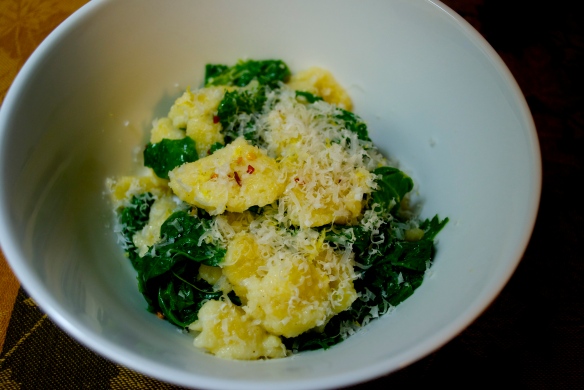 I think the next time I try this out, I’ll make some small adjustments. First, the dumplings themselves are fairly bland, which should be expected considering they are literally just semolina flour and water. Even cooking them in heavily salted water won’t make them more than that. But I read that some people use vegetable stock when making them for extra flavor, which is a pretty brilliant idea.

I will also try the flicking method again and see if with reduced water temperature they will hold together. It’s worth another shot just to see which issue was the culprit. And I read that you can make these a day in advance and let them dry out a bit which can help with the cooking process as well. Seems like a good plan!

All in all, this was a fun, quick meal that was really unique. The dumplings are toothsome, which I really enjoyed, and the mustard greens added some serious kick. I would definitely suggest adding lemon like I did — it needed something to brighten the flavor. The pasta liquid was also a good addition to help prevent it from being too dry. In the end, it was nice to try something new and still sit down with a satisfying dinner a half an hour later!

17 thoughts on “Branching out with Frascatelli”