Last week I wrote a post about my frustration at having a recipe from Food & Wine look nothing like the picture in the magazine. While I am well-aware of food styling and Photoshop skills, that experience still got under my skin. And here’s why — usually when I cook from a recipe, I am successful! See above: a beautiful chicken dinner crafted last weekend from this recipe in Bon Appetite.

This dish turned out exactly like I expected it to — crispy chicken skin, golden lemons and succulent sauce. It also made me a believer in a new cooking technique that I had been hesitant about trying. Bon Appetite recommends starting the chicken skin down in a room temperature pan which, as a former line cook, goes against everything I’ve ever learned. On the line, the mantra is always “hot pan, hot pan, hot pan.” It gets drilled into you. But this worked like a dream — the skin renders so perfectly that it’s practically paper thin by the time the meat is cooked.

Here’s how things went down.

Start with your room temp. pan. Add chicken, bring heat up and let sizzle away. 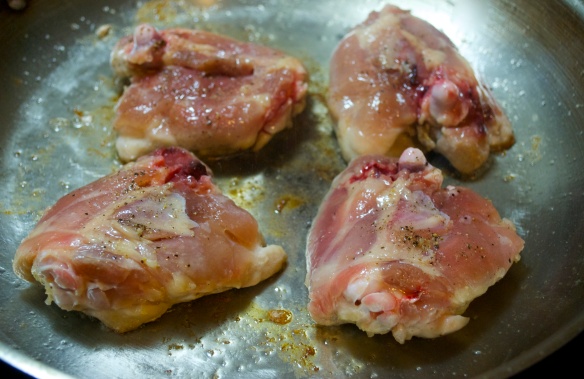 Continue to render skin, pouring off almost all the fat every few minutes, until chicken is partially cooked. If you want to check out the deliciousness in progress, be aware that the skin will stick to the pan at first so use a spatula so you don’t rip anything. And don’t even think about doing that until at least 5 or 6 minutes into cooking, you don’t want to interrupt the caramelization. 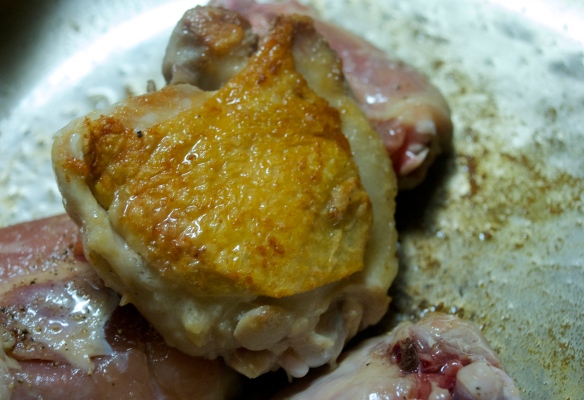 On its way to perfection!

Then scatter thinly sliced lemon pieces around the chicken and put the whole pan in a pre-heated oven (425 F) until it’s done. 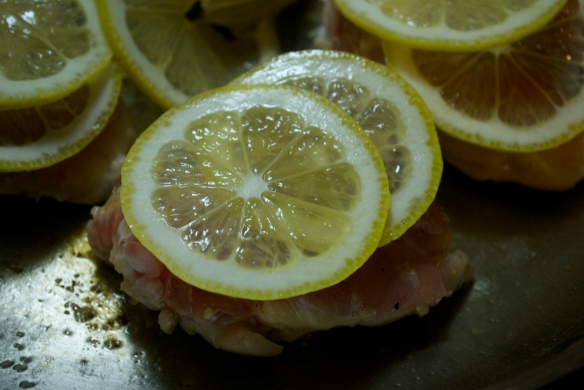 Now the recipe informs you that “the slices on top of the chicken will soften; those in the skillet will caramelize.” Either I sliced more thinly than they intended or they have magical lemons because the ones touching my skillet turned out like this:

Yeah, those aren’t going to work…

Those ones got tossed out, but the ones on the chicken turned out tender and golden. Next time, I’ll just keep everything on the poultry, no biggie. 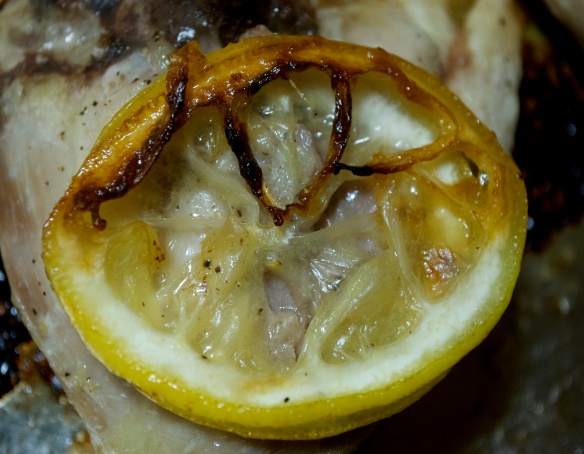 Remove chicken…and here’s a little disclaimer. The skin really will be super thin and rendered, but it will feel a soft from sitting skin down in the fat. So when I removed the pieces, I popped them skin-side up in a smaller pan and put them back in the oven for less than a minute. They came out looking like this:

Then it’s on to the sauce:

I also added a nubbin of butter because, well, why not? When everything was finished, about 30 minutes in total cooking time, I sat down to a serious feast. Broccoli rabe, pea shoots, farro (tossed with chicken sauce) and chicken.

Take note Food & Wine, because this meal was a smashing success. The skin on those thighs was like chicken cracklings — every bite was crunchy and salty and delicious, no limp skin here! The meat itself was juicy without a hint of grease. I can tell you I’ll be using this cooking method a lot in the future!

The flavors also went great together — I rarely have oregano on hand and the fact that I happened to was really the only reason I made this chicken. And I am so happy I did because this chicken redeemed my love affair with cooking magazines! Onward and upward, right?

17 thoughts on “A Story of Redemption: Magazine Chicken Done Right”