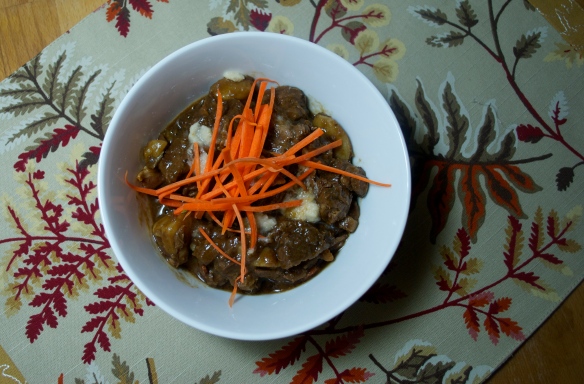 Even though it’s December, it’s still been fairly temperate in Portland. There was one day when I woke up to see a light dusting of snow, but for the most part it’s been a mellow winter. Which is pretty perfect as far as I’m concerned. As someone who bikes to work year-round, I am loving that when I go outside it still looks like autumn.

And while I haven’t been feeling the intense desire to hibernate, I still have had the usual cold-weather culinary urges — stews, soups and crockpots, oh my! I’m sure you all know the feeling, these are the things that get us through until spring. It seems so comforting to have a pot on the stove filled with chili or split pea soup.

So when I picked up a small chuck roast at the store, my first thought was beef stew. I usually make a pretty traditional version — mire poix, tomatoes and lots of woody herbs. However, I was feeling a little frisky and decided to try something different. Which is where this recipe for stout-braised beef comes in.

Now first let me assure you that I know cooking with alcohol is nothing innovative. I’ve been a dedicated believer in the power of beef and beer for quite some time. Perhaps it was the horseradish garnish that made this recipe so intriguing.

Which leads me on a slight tangent…As a kid, I thought horseradish sauce was the most disgusting thing ever. I’m sure it had nothing to do with the taste — I never got that far — it must have simply been the name. But my stepdad (a longtime horseradish lover) swore that some day I would discover its amazing and spicy deliciousness on my own. And, crazily enough, I did. I’m not certain of when it happened, but if you give me roast beef, my first instinct is to look for the “horsey sauce,” the hotter, the better.

And so this riff on beef stew called out to me. I was also curious about the addition of bacon (often I prefer my bacon on the side so I can enjoy it undiluted) and the uncooked julienned carrots on the top.

Of course, there were some minor adjustments. I appear to be incapable of following a recipe completely. So yes, I left out the dill — it’s the one herb I can’t stand. I also served the stew over roasted carrots and parsnips instead of the egg noodles for some extra roughage. And I used jarred horseradish because the fresh root I had bought a few weeks before had, unsurprisingly, withered into something unrecognizable. Apparently I’m also terrible about remembering to use something once I’ve bought it.

Even with the modifications, this meal was still a winner.  The beef was tender, the sauce it cooked in was thick like gravy and pungent with beer and onions, and the bacon added an indulgent smokey crunch.

The horseradish, mixed with white wine vinegar, gave the dish a bit of color and some much appreciated spice. It made this stew thoroughly warming. And the raw carrots, while I’m still not sure I entirely understand why they were there, worked out well for added texture.

Even if it’s not so cold that your only desire is to be under a thousand blankets, this beef stew still has a place on your table. And if you happen to be in a place covered in snow, get out some beef, a jar of horseradish and a bottle of Guinness and you’re on your way to great things. It won’t be winter forever, so you better enjoy this while you can!

8 thoughts on “Beer-Braised Beef: Helping to keep you warm this winter”