I have really been in love with April Bloomfield this year. It started with her Lyonnasise-style vinegar chicken recipe. I was so blown away by it that my husband bought me her cookbook as a gift. The first thing I made was her lentil and chickpea salad because it sounded so wonderful. The second thing I made was this recipe — her chicken adobo.

I think I really wanted to make it because it calls for chicken braised with copious amounts of garlic and vinegar, much like her other chicken recipe. However, this one also contains plenty of ginger and soy sauce, thus it has an entirely different (Filipino) spin.

First up, I need to say I did not use bone-in chicken legs and thighs cut into two-inch pieces across the bone. While I can appreciate the idea, I didn’t bother. Don’t hate me for that! I just used a package of bone-in thighs and adjusted the cooking time accordingly.

That substitution aside, I followed the recipe in every other way.

Start by putting the chicken in a very hot Dutch oven, with a good splash of oil. Once the meat is crispy and golden brown on all sides, remove and set aside.

Then add the unpeeled cloves of garlic, ginger, peppercorns, bay leaves and onions to the pan and sauté for about 10 minutes.

Add back the chicken plus the soy sauce and rice wine vinegar. Cover and cook until tender. My chicken thighs ended up taking about 90 minutes before I was satisfied with them. By this point the meat was incredibly tender and the smell in the kitchen was mouth watering. Seriously, it was almost impossible to sit on the couch and focus on anything but the piquant fragrance.

But, finally, I was able to end the torture and enjoy a plate full of goodness! 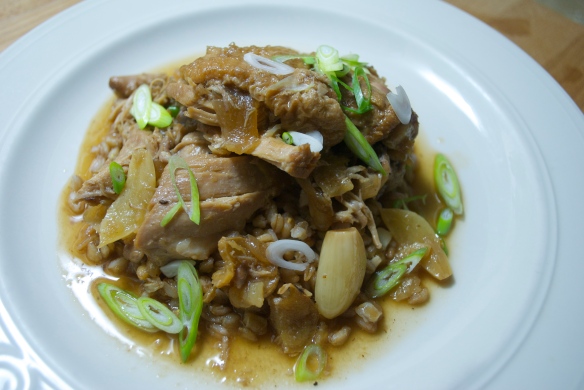 When all is said and done, I think I liked Bloomfield’s Lyonnaise-style chicken slightly better, but this was still pretty amazing. I served it up with plenty of the braising liquid and some farro to soak up it all up. The garlic became so tender it slid out of the peel and the ginger added a lovely bite to the tang of the vinegar. The chicken meat fell right off the bone and, if we’re being honest, I was happy there was no one else home to share it with!

2 thoughts on “Cooking my way through A Girl and Her Pig: Adobo à la April”