While on holiday in Montreal, we were unknowingly caught in the midst of the thousands of students and citizens protesting the government.

The Université du Québec à Montréal (UQAM) is a public French-language university. The campus is the main stage for a majority of the recent riots and protests.

Even with all of the great food we ate while in Montreal, our best vacation stories came from some totally unexpected events. Actually, let me clarify — unexpected to us. Like the worst of Americans, we didn’t do much research about Montreal except for menu stalking, map reading and guide book skimming. I could tell my husband, as we walked through the Parc du Mont-Royal, all about the Croix that stands proudly on the side of the mountain. But I couldn’t tell him why, on our first night in town, we had to fight through a stream of police cars just to get to our hotel…

These are a couple of cop cars in a line of nearly thirty. All of the police inside the cars were dressed in helmets, ready to jump out if necessary.

After a fabulous dinner at the Liverpool House we caught a taxi back to our hotel. However, every street for at least a mile was blocked off by cops and the sound of sirens filled the air. We were befuddled, thinking maybe there had been a terrible accident or a drug bust.

Our cab driver was not too much help, as he was one of the few people we encountered who spoke only French. He just kept driving, trying to get us closer to our destination, throwing up his hands in frustration every time we were stymied by yet another group of police.

The next day, in true vacation style, we forgot all about it. The streets were calm and the sun was shining, so we headed out from our hotel, the wonderful Auberge le Pomerol, to walk around the nearby Plateau area. After hours of meandering, eating and drinking, it was dark when we decided it was time to make it back. As we got closer to our hotel, the streets became more and more packed with people. Some were walking while others were almost running, but one thing was consistent — they were all headed in the opposite direction that we were going. At first we thought, hey, the guide book was right — the people of Montreal like to party. Here we were, heading home to sleep, and literally thousands of people were just leaving their houses!

Canadian riot police in all their gear

That’s when we heard a rhythmic thumping coming from in front of us and saw a row of riot police slamming their batons on their shields. A cloud hung over them from slowly dissipating smoke bombs and pepper spray. The people who had passed us must have been right in the center of the madness. We bolted into an alley to watch for a while before deciding to try to make it the last two blocks to our hotel.

The police stood blocking one of the streets, but luckily not one we needed to cross. So we walked quickly and purposefully, eyes burning and sneezing every few steps from the spray, until we made it into the lobby. The concierge gave us a sympathetic look. When we inquired as to what was going on, he said it was part of a student strike that had been happening every single night for nearly 100 days. In fact, the 100th day of protesting was only two days away. And our hotel was in the thick of it.

We did research immediately upon entering our room. It made for fascinating reading, and quite honestly I am torn as to which side to take. The strike started as a way to protest the tuition increase in Montreal, but as the government has begun to crack down on the protests, police have been restricting civil liberties of the people of Montreal. We heard mutterings of “martial law” being enforced and in fact, it does appear that Canada’s “emergency laws” are currently in effect.

It’s certainly not a black-and-white issue and there has been escalating violence from both parties. We passed by a cop car with a broken windshield and read about students throwing Molotov cocktails. But we also heard reports and saw pictures of police spraying not just protesters, but also people drinking outside in bar patios. I’m clearly not the most informed person to sum up the whole story but I did find plenty of good articles here, here and here.

The next day we began to take notice of the red squares that protesters wore pinned to their clothing. It started out with seeing one or two people with the squares, but then we started to notice they were everywhere.

People hung them outside of their apartment buildings: 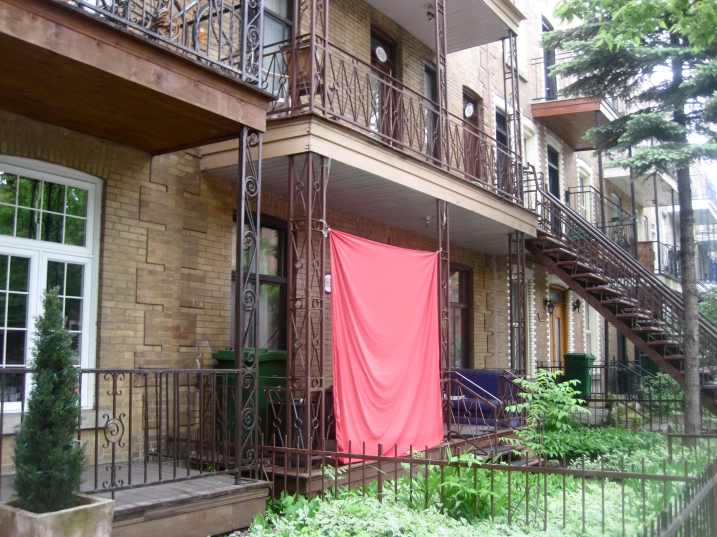 We also saw them painted on billboards and advertisements: 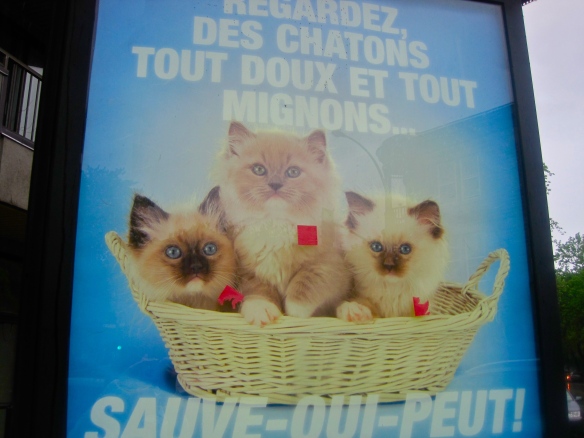 We saw them used in window displays:

Seen in the window of an adult store

We even saw them taped to building windows on the school’s campus, right in the heart of the strike: 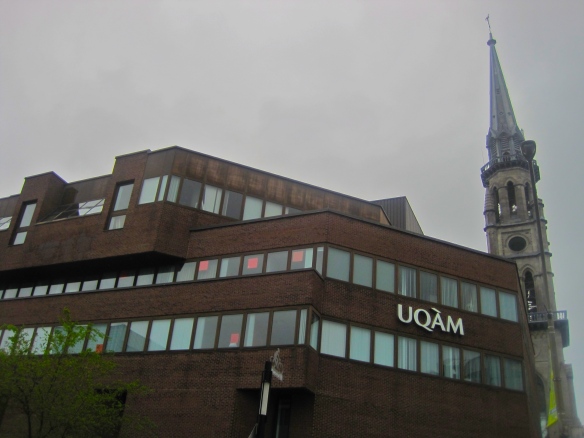 We were careful to stay as far away from the chaos as possible, particularly on the 100th day when the protest went on all day and into the night. There were even helicopters circling the city. And when it wasn’t possible to avoid the situation, we simply tried to not engage. Though, when opportunities arose, we did like to pick the brains of locals to see what their positions were — it actually made for very fascinating conversations and it was an excellent ice breaker.

We talked to the chef of a restaurant who said he didn’t care if the protesters broke all of his windows or even burned the city down. He thought the riots were amazing and was proud of the students for their perseverance. On the other hand, we met a server, just 26 years old (the same age demographic as many of the students protesting), who was opposed to the movement as it could adversely affect the local economy.

Valid points all around, which reenforces how happy I am that I don’t have to choose a side. I can just appreciate the fact that once we arrived home, we had an interesting, hopefully once-in-a-lifetime, story.

4 thoughts on “And there were riots in the streets of…Montreal?”