This post was almost titled “Clearly the world is against me: An ode to turkey lettuce wraps.” Besides being too long, it sounded a little too fatalistic.

Now you may ask, why would the world be against these deliciously beautiful  things?

While I don’t have the answer to that, the least I can do is fill you in on the story.

The first night I was planning to make these, I had gotten off work and was waiting for my husband to pick me up. However, he hadn’t checked his phone to see when I was ready so I waited for a half an hour before he rescued me. By that time I was borderline “hangry” and so he insisted we eat at the taco cart instead. He’s a smart man.

The following day I was determined to make this recipe, come hell or high water. I got home, changed into pajamas (I am a big fan of being as comfortable as humanly possible as often as possible) and started cooking the rice and the turkey. I was pulling out the ingredients for the sauce when I realized something was missing…fish sauce. We had a giant bottle of it somewhere in our fridge, I was sure. There was no way we had used it all — we bought the biggest jug of it we could find at Fubonn.

I searched high, I searched low, but I couldn’t find it anywhere. Then visions of my husband danced in my head. I sent out a text and got a quick reply. “Uhhh…sorry, I took it to work.” Just as I suspected. Now strangers at the restaurant were enjoying delicious things made with my fish sauce. Things like General Tso’s sweetbreads.

I sighed. I put on real clothes and headed to the store. I was back in less than 15 minutes. I got on with my life…

Back to the wraps. They are easy, healthy (taken from America’s Test Kitchen’s 2010 Light & Healthy cookbook) and require very few ingredients, all of which create a perfect meal in my book… Let’s get started. 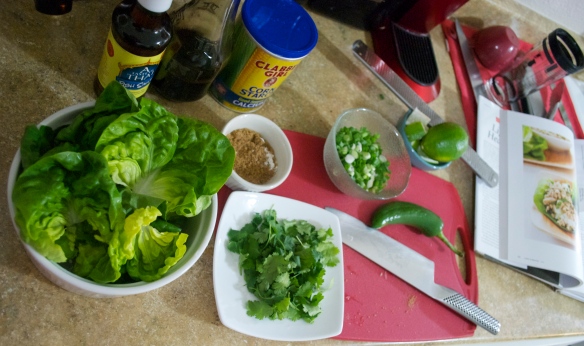 Chop one bunch of green onions and tear up about a half of a cup of cilantro leaves. The recipe calls for basil which I never seem to have handy, but cilantro I always seem to have floating around. I minced up a jalapeño and got out a couple of limes for zesting and juicing.

Then take a pound of ground turkey and squish it with the back of a spoon. The cookbook says this helps the meat get a nice consistency for wrapping in the lettuce. I don’t know about that, but it’s fun to squish meat, so I do it. I’m easily entertained.

Then, before you get too far along and realize you don’t have an important ingredient (ahem), make your sauce. Combine 1 tsp of cornstarch with 1.5 TBS brown sugar in a small bowl. Add 3 TBS of lime juice and 3 TBS of fish sauce, mix well.

Then in a hot skillet with a little oil, start browning the turkey, breaking it into small pieces as it cooks. I usually hit it up with some red chili flakes as well along with the jalapeño. If you want to use some Thai red chilies, feel free. You can adjust the heat according to how brave you are. I’m a bit of a sissy so I tread with caution.

Then throw in the lime zest (about 2 limes worth). I also throw in half of the green onions and basil/cilantro at this time. Because I’m a rebel.

Next is to add the sauce, stir it in good and let it bubble for a while until it’s slightly thickened — about 45-60 seconds. Add the rest of the green onions and your herb-of-choice and presto — you’re done! I dare you to find something easier to make for a week-day dinner that doesn’t involve a can opener or a microwave.

I’m sure you could punch this up by adding some julienned (maybe lightly pickled) cucumbers or carrots if you were feeling frisky. But this was about all I could manage after the previous shenanigans.

It should also be stated that this is a rare occasion when I actually make rice instead of farro. I’m sure my husband has been subjected to this made with farro in the past, but I have to say, sticky rice works a lot better. It’s already going to be messy, so why make it more difficult to eat?

And don’t fear the fish sauce — this doesn’t taste the least bit fishy. It’s there to add a depth of flavor that is really irreplaceable. Trust me on this one — hell, I changed out of pj’s for this meal and it was so worth it.