I am not, by any stretch of the imagination, a skilled crafter. Sure, I can crochet a scarf that looks like a scarf and I have successfully made some mosaic stepping stones. I even managed to make these lovely vase fillers after some inspiration from Pinterest. But many things, like knitting, quilting and sewing take a little too much precision for me to attempt.

Instead I am the person who brings her too-long pants to her 94-year-old grandma to have them hemmed. And, the last time, to have a button sewn back on. It’s my not-so-secret shame. I guess my mom caught on to my antics though and the next thing I knew she was planning a sewing weekend for us so I could learn to hem my own clothes.

This was back in December and the holiday madness and exhaustion afterwards kept us from getting together until last weekend. On Friday she showed up at our house in Portland with the Singer she bought long before I was born, ready to teach me the ways of the needle.

Now here’s the thing. I actually took a class on sewing in middle school. But I was not in my element. Instead it seemed so supremely unfair that I still get mad thinking about it. The summer before seventh grade, I had broken my arm in a nasty bike accident. I was unable to attend PE for the first semester of school so instead I was placed (much to my disgust) in Home Ec. But the first day things started out unexpectedly promising when the teacher had us partner us and bake cookies. Since I have always liked being in the kitchen, I remember thinking the next few months were going to be awesome.

Then the teacher dropped the bomb — the first day is making cookies. The first semester is sewing. The second semester was cooking. I think I blacked out that class because all I remember is the anger at being forced to learn about different sewing techniques instead of how to make cheesecake. It was five hours a week of learning about running stitches, threading a needle and trying not to fall asleep.

At any rate, this weekend, we started out slow. My mom ripped up an old pillow case so I could practice working the machine. It was pretty fun to think of her back when she was my age, using it to make clothes. When I finally proved I could sew in a straight line — well for the most part — she rewarded me with a sewing expedition.

We went to Joann’s where I got to poke around in the fabric section — the one department I avoid when I go there. Since spring is (hopefully) on its way, I decided to go with something a little whimsical, cheerful and well…springy. I fell in love at first sight with these happy little birds and the green polka dot pattern just makes me smile. 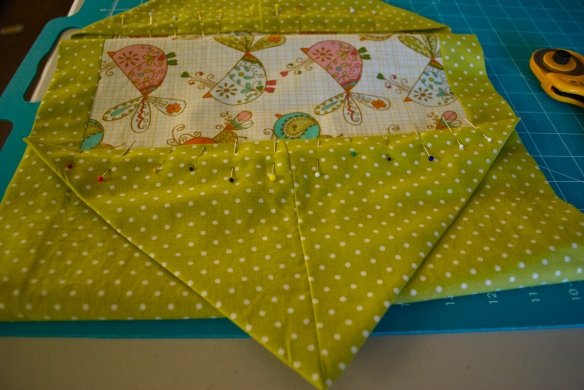 Before we brought anything to the cutting counter, we had to decide on a specific project. I am all about cute little things to dress up my dining room table, so my mom suggested a pattern she has called the Ten-Minute Table Runner.

First off that name is a straight-up lie.

But, an hour or two later, I have to admit it did make a damn fine table runner. It was relatively easy in the end, though all the washing, pressing and pinning that was necessary in sewing was a bit of a surprise to me. Not a real fun surprise either. I certainly have a new-found appreciation for Project Runway, I can tell you that much.

Maybe with a couple of years of experience, I’ll whittle my time down to ten minutes, but for now I’m pretty proud that I finished this one in a day. It was also fun to sit across from my mom at my dining room table, working on my table runner while she made some new curtains for my bedroom. We drank coffee, made small talk and shooed curious cats away from our pin cushions while our sewing machines whirred away in tandem. 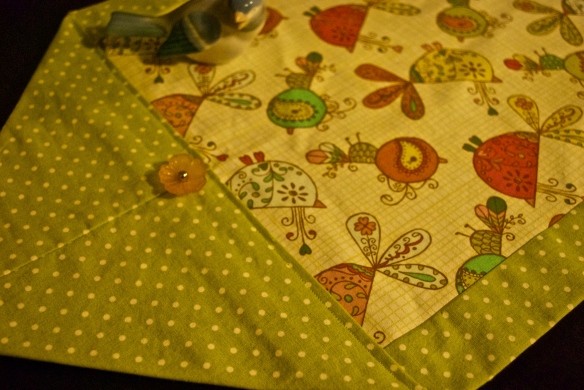