I wrote a post not too long ago discussing my love affair with onions. While I also briefly touched upon my affection for puff pastry, it occurred to me I could expand on this subject. Looking through pictures from the past few years, I found some excellent examples of why it’s a great idea to always keep a box of puff pastry in your freezer.

First up are some appetizers I did for Oliver’s birthday party last year. Since it was  a potluck-style game night, I thought a vegetarian-friendly finger food would be fun. In my recipe folder (of course!) I found a tartlet that involved ricotta cheese, roasted cherry tomatoes and puff pastry — clearly it was perfect.

I rolled out one dough and, since I was feeling frisky, decided to tweak the recipe a bit. I added cloves of roasted garlic and threw some pesto in with the ricotta. Once the puff pastry was cooked and the toppings were assembled, the final result was impressive. Not only was it pretty, but it was also damn tasty. Don’t judge — I had to try a piece. Or two. It is irresponsible to bring bad food to a potluck. 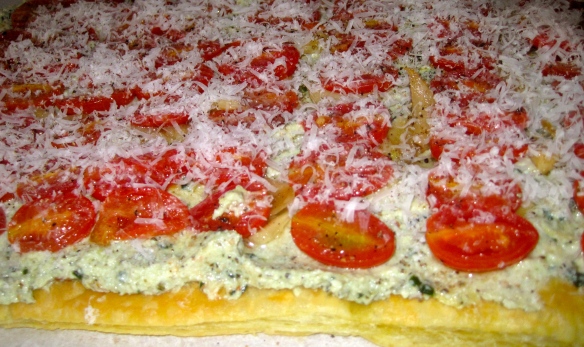 In fact it was so good that I felt like I should make one more tartlet just for kicks. Since I was out of cherry tomatoes, I decided to go in a slightly different direction. I still had pesto, more garlic and some Parmesan laying around. Then a small bag of yukon gold potatoes caught my eye. While working in an Italian-influenced restaurant a few years ago, we used the pesto/potato combination in many different applications, usually in pastas. This seemed to be a prime opportunity to play around with it.

So I thinly sliced the potatoes, tossed them with some garlic oil, salt and pepper and then roasted them on a sheet pan until they were golden brown and tender. I did the same layering action, grated some parm on top and voila — tartlet number two was finished, delicious and ready to roll. And everyone loved them — hooray!

The tartlets are especially nice because you can cut the pieces as big or as small as you want. One large slice of either of these along with a small side salad would be the perfect brunch. Small squares were great for the potluck, as people could nibble on them throughout the evening. The best part is that humble ingredients can make a fancy-looking dish that people think you spend a lot of time preparing. In reality, once your puff pastry has thawed, this comes together quite quickly and you can use almost anything edible that you happen to have on hand.

Here’s a couple more appetizers I made with my friend Ariel for my parent’s housewarming party a few years ago. I got my inspiration from a Food & Wine recipe and played around with the flavors. We topped the cooked squares of puff pastry with homemade fig jam, Roquefort and toasted walnuts. We did another set with roasted diced beets and goat cheese. As a helpful hint, we did follow the instructions of cooking the pastry between two cookie sheets to prevent the “puff.” This made the squares more like crackers — crunchy, buttery crackers. 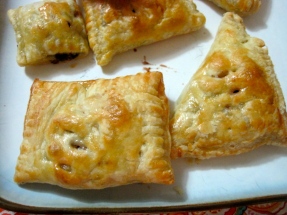 Another great use of puff pastry is for desserts. Besides your usual fruit tarts — here’s an example from one of my favorite blogs, The Pioneer Woman — there are hundreds of sweet recipes involving puff pastry. I came across one on Pinterest that I wanted to make as soon as I saw it — little golden-brown pillows, stuffed with Nutella, toasted walnuts and marshmallows. The toasty crispy outside and the warm gooey center was nothing short of amazing. They were insanely easy to make, instantly satisfying and, of course, extremely versatile. And they are also very popular — one google search will net you numerous recipes and variations.

Basically have fun with it — thankfully puff pastry is as forgiving as it is inexpensive. There’s no excuse not to experiment and see what goodies you can create. The possibilities are endless….and I promise you, they will be delicious.

3 thoughts on “Speaking of Puff Pastry…”